In this brief note, I wish to reflect critically on the predominant discourse that has been used, mostly unquestionably, about the recent ‘refugee crisis’ but also about the wider humanitarian efforts to assist ‘traumatised’ refugees, people who come across the sea, feared by many, to alter ‘our European way of life’.

Essentially, this discourse revolves around the following assumptions and positions: refugees are seen as having being ‘traumatised’ by the hardships they had endured both in their countries of origin as well as along the way to reach places of safety, mainly Europe. The distinction between refugees and economic migrants, despite its limited merit, it blurs the fact that both groups of people had to abandon involuntarily their home spaces because they were not viable for them to live and thrive in peace and dignity. Whereas our Western media tend to depict vividly the landscapes of destruction and misery in the refugees’ own countries, the landscapes of poverty and neglect that ‘economic migrants’ are forced to leave behind remain, largely, unknown to us; instead, what the media tend to emphasise is ‘them’ coming to ‘our’ countries to profit economically, thus ‘threatening’ our already diminished resources. If one of the central criteria for distinguishing a refugee from ‘economic migrant’ is the dimension of political oppression then, surely, this dimension is one of the significant reasons that their countries remain in such impoverish states that make living in them unsustainable. Moreover, the safe countries that they flee to are strongly implicated in those political dimensions. Therefore, questions need to be asked about our responsibility in rendering their countries of origin ill equipped for decent human habitation, in the first place.

This dominant discourse tends to present these people as helpless and traumatised, underplaying or even ignoring their resourcefulness and strengths that must have helped them to survive the hardships at home (e.g. political oppression, military conflict, economic exploitation) as well as the adversities they encountered along the way to safety. Also, it ignores all the other strengths they have retained from the times before their exposure to adversity as well as the new strengths that, inevitably, they have gained from having survived these adversities.

Undeniably, these phenomena are emotionally charged and can be overwhelming for all of us. When exposed to overwhelming experiences, the tendency is to attempt to grasp the ungraspable and to create a patchy order that would give us a reassuring sense that we have some understanding of what is happening, why it happened and what needs to be done to improve it. Accordingly, we tend to oversimplify complex situations, and one of the most common forms of simplification is polarisation. Hence, in relation to these phenomena, there is a plethora of various forms of sharp polarisation at all levels: us / them, good refugees / bad migrants, traumatised refugees / resilient refugees, ‘refugees welcome’ / ‘refugees out’, we are impotent / we are omnipotent, compassion / fear, etc. In addition, this discourse engenders an othering process that, inescapably, leads to further epistemological distortions that include pathologisation of human suffering, bestowing and maintaining a ‘victim identity’ on these survivors, and creating a system where in order to assist them the precondition is, first, to pathologise them. The diagnosis of PTSD [Post-traumatic stress disorder] has become one of the main criteria for granting asylum.

Although this discourse, this general framework of conceptualising the refugee situation, is an inevitable and understandable product of our attempt to grasp painful complexities, at the same time, this very same discourse with its lack of complexity, inadvertently and tragically distorts considerably our perceptions, presenting these persons monolithically, mostly as helpless victims, and us, accordingly, as their saviours. We find it difficult to discern their resilience and see them in their complexity, i.e. as being both resilient as well as in distress, as persons with enormous vitality and potential as well as in need of human compassion. This crude discourse does not have the sensitivity of differentiating between a person becoming a victim of circumstances from a person encapsulated within a victim identity. The societal discourse on trauma, that cannot distinguish either between distress from disorder, comes to our ‘rescue’ as a seemingly graspable conceptualisation, regardless of its dehumanising effects.

It is for these reasons that it makes sense to claim that our societal discourses on refugees and trauma have a traumatising effect on our very conceptualisations of who they are, of what they have experienced and of how to assist them. In effect, these discourses not only traumatise ‘them’ but also ‘us’, not only in terms of the usual understanding of ‘vicarious traumatisation’, but mainly in terms of infecting our epistemologies and imposing perilous identities such as ‘victims’, ‘saviours’, etc. These discourses are so deeply ingrained that it is impossible to even consider alternatives. For example, it is perfectly doable that, by proper arrangement, these people could be flown into safety in an organised manner without using traffickers, without being exposed to the hazardous journeys, their skills matched with the needs of the receiving countries, without all the tragedies that we have accepted as inevitable. 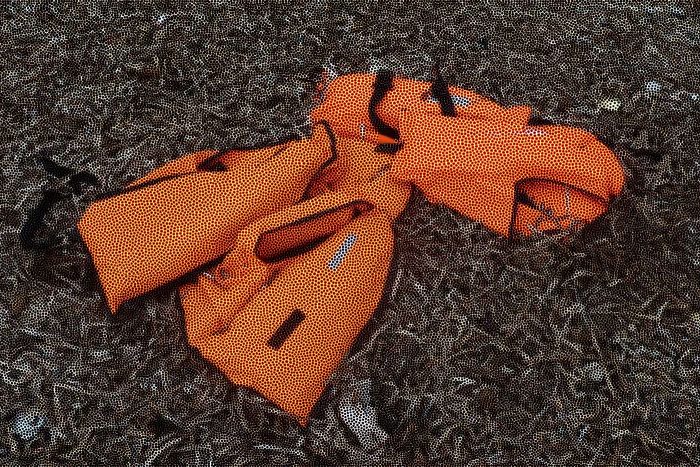 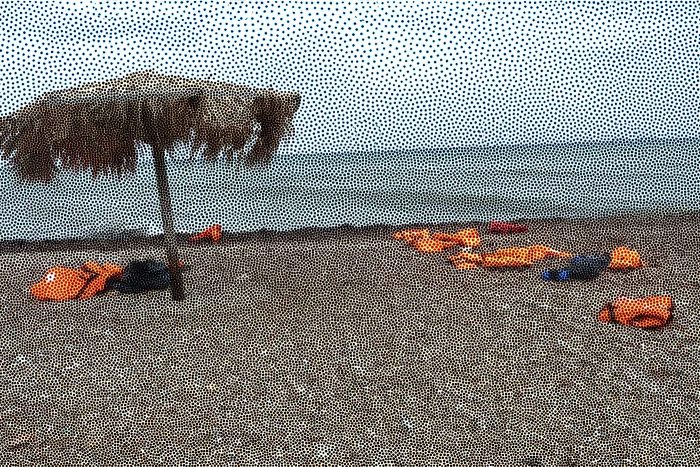 An emblematic image of this tragedy is the orange life-saving jacket. Heaps of them litter the Greek islands’ coasts, polluting the environment and posing agonising questions. A very large number of these jackets are, in fact, fake, i.e. they are not made of materials that can save lives – they are made of cheap stuff that instead of enabling floating they facilitate sinking, making them death traps. They are icons of trickstery, deception and exploitation. They are ‘orange stigmata’ on our European conscience. They are painful reminders of turning human tragedies into political football, into hurtful wounds of betrayal and treachery. They are grotesque testimonies of breach of trust, of falseness, duplicity, callousness, merciless cruelty, cynical pretension. These stigmata on our European body testify to our sanctimonious intentions gone wrong.

Part IV of Hobbes Leviathan is about the ‘Kingdom of Darkness’, which he understands to be the outcome of the misinterpretation of the scriptures. We can say that our traumatising discourses are also examples of misinterpretations of these phenomena, deforming these human beings into victims and us into saviours.

In a similar vein we need to reflect on our morbid fascination with their suffering. This could be characterised as modern forms of humanitarian crusades. The polarised segment of Europeans, those who want to help these people (as opposed to the other segment consisting of those who want to throw them back into the sea, to ‘protect our way of life’) would do anything to assist, to get close to the action, to feel their pain, often bordering on emotional voyeurism. So much so that they will fight who will grab first the child refugee from the approaching inflatable boat in order to be photographed so that their financial sponsorship is continued, thus risking everybody’s life on the boat. The humanitarian crusaders’ fever is so strong that there are those who sit in their country cottages in North America and by Skype supervise the foot soldiers modern-day crusaders on the Greek islands. There is nothing wrong, of course, in wanting to help. The question is about the motive and awareness of the complexity of these tasks that tend to be oversimplified to a degree that often achieve the opposite from the intended effects. Unsurprisingly, there is a great deal of telescopic philanthropy in these efforts. Charles Dickens popularised this term, referring to the concern certain British exhibited for the rights of African Americans, whilst ignoring the rights of the Africans on their own soil.

Finally, it is instructive to reflect on the current societal discourses about these phenomena as expressions of what can be termed a new philanthropic romanticism. This form of romanticism shares many common features with the romantic movement such as emphasis on emotion, the exotic, individualism and humanism, nationalism, heroic achievements, gothic world of nightmares, fascination with decay and destructiveness, libertarian spirit, etc.

To end with an ominous quotation from Dawood’s Leviathan, these discourses, ‘Like some crazy machinery that hadn’t been informed it [is] … still toiling needlessly’.

Renos Papadopoulos, PhD is Professor of Analytical Psychology and Director of the Centre for Trauma, Asylum and Refugees (CTAR), a member of the Human Rights Centre, and of the Transitional Justice Network, all at the University of Essex, UK, as well as Honorary Clinical Psychologist and Systemic Family Psychotherapist at the Tavistock Clinic in London. In addition, he is a training and supervising Jungian psychoanalyst and systemic family psychotherapist in private practice. As consultant to the United Nations and other organizations, he has been working with refugees, tortured persons and other survivors of political violence and disasters in many countries. He lectures and offers specialist trainings internationally and his writings have appeared in fourteen languages.