The subject of this text is the peculiar evolution of a group of marine animals, which, through a series of adaptations, pre-adaptations and symbiosis has come to occupy a surprising ecological niche, which are the shipworms. Shipworms are not worms, although their long, soft bodies make them vaguely look like worms. In fact they are bivalves, which are molluscs that present their shells divided into two halves joined together by a hinge, similar to mussels and clams. They live in tunnels they dig into wood, and therefore they have always been a threat to all maritime wooden artefacts, including ships, which is the reason why Linnaeus called them ‘calamitas navium’. 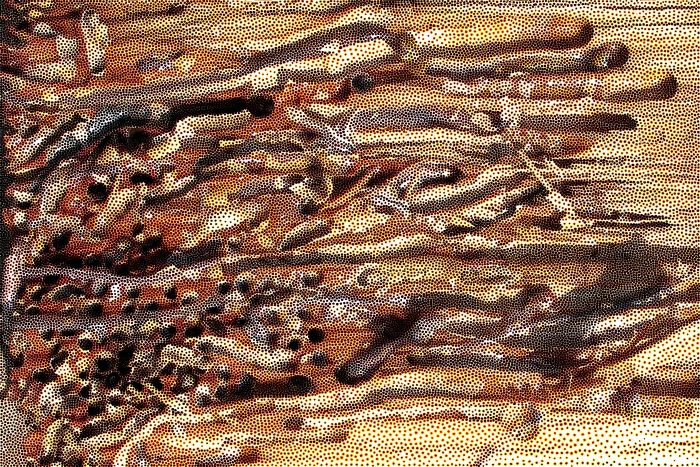 Shipworm attack on a navigation pile in the Lagoon of Venice

Shipworms have evolved by modifying two main traits of their physiology and ecology, namely the way they feed themselves and their lifestyle. Most bivalve molluscs feed themselves by filtering water and retaining the food particles contained therein (filter feeding), especially plankton. The mechanism of filtration has evolved from the respiratory apparatus: to breathe, bivalves generate a current of water that enters through an opening of the mantle – the incurrent or inhalant siphon – passes through the gills – where the gaseous exchanges take place – and exits through another opening of the mantle – the excurrent or exhalant siphon. Water carries the food particles that are caught by the dense lamellae of the gills through which it passes, as through a sieve. The food particles are then conveyed to the mouth and swallowed.

Many species of bivalve protect themselves from predators burrowing into the seabed, from which the siphons protrude. A smaller number of species prefers to dig tunnels into more compact substrates. The Piddocks (Pholadidae) – such as the Pholas dactylus and various Barnea species – live in soft rock, compact clay, peat or marbling wood, while Shipworms (Teredinidae) – such as Teredo navalis and Lyrodus pedicellatus – live in wood, also drilling into wood of remarkable hardness, such as oak. Piddocks and Shipworms are phylogenetically related and were grouped into the Pholadoidea superfamily, along with the Xylophaginae, also woodborers, which live in deeper waters.

All the Pholadoidea species dig their tunnels mechanically, using their shell as a milling cutter. By contracting their muscles, they spin rasp-like valves, which are equipped with small teeth and that abrade the substrate, producing circular section galleries. Only the holes of the shipworms are lined internally with a calcareous layer, which protects the long soft body of the animal from contact with the wood. The tube is pulled out of the wood surface through a small opening from which siphons can extend. Two calcareous structures, in the shape of a pallet, serve to close the tube like a door when needed.

The Piddocks use semi-hard materials exclusively as shelter, while still relying on filtration as a feeding habit. On the other hand, shipworms have found another evolutionary path, choosing wood as a substrate and the possibility of feeding on wood (xylophagy), albeit indirectly through the aid of symbiotic bacteria. The abrasion action during wood penetration produces very fine sawdust that can not be digested by molluscs, but can instead become an optimal source of food for micro organisms capable of degrading lignocellulose, which is the main component of wood. 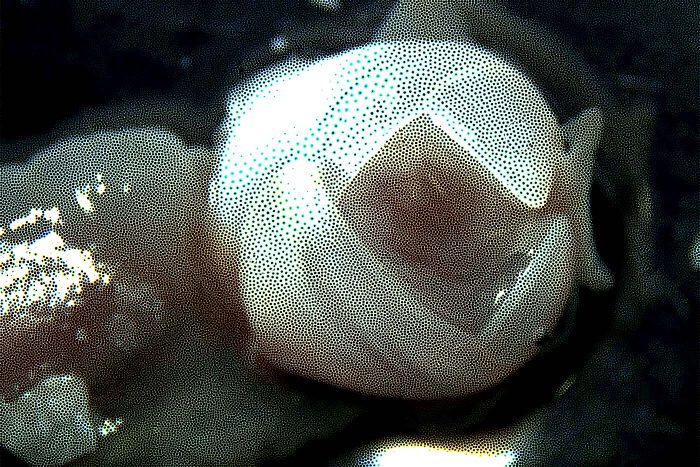 Living in close contact with cellulosolytic bacteria, shipworms have evolved a heterotrophic symbiosis with them by accommodating them in special epithelial cells, the bactiocytes, located in a region of the gills known as the Gland of Deshayes. Shipworms host a bacterial community in which various strains of Teredinibacter turnerae dominate, from which they obtain enzymes that can break cellulose into simple and assimilable sugars, and that provide an environment and the elements necessary for their growth. The digestive enzymes produced in the bacteriokite are transported in the caecum, a sack-like appendage of the stomach, in which the wooden microparticles are accumulated and digested. Along with enzymes, bacteria develop substances with antibiotic action that prevent proliferation in the caecum of other bacteria.

Host bacteria that produce digestive enzymes outside the digestive tract while maintaining a practically sterile intestine are a unique phenomenon in the animal world. These bacteria are also capable of capturing inorganic nitrogen from the water and pass it on to the mollusc in absorbable form. Shipworms benefit from this process, since nitrogen is indispensable for protein production while wood is very poor in it. Shipworms, however, have not ceased feeding by filtration so that the different species rely on variable proportions on xylophagy and filtration.

Endosymbiotic bacteria are present in the gills of many species of bivalve, providing the conversion of compounds otherwise unusable by the host as hydrogen sulphide and methane, in addition to the abovementioned cellulose. Also among the shipworms are those who prefer a symbiosis with chemoautotrophic bacteria rather than with cellulosolytic heterotrophic ones. The Kuphus polythalamia is a giant shipworm (it can reach a length of up to a metre and a half in length) that no longer lives in the wood like its ancestors did, but instead can be found burrowed into the mud of some tropical lagoons using its calcareous tube as a shell. During its evolution, the Kuphus ceased to feed on wood and now it relies entirely on filtration and the activity of symbiotic chemoautotrophic bacteria that use hydrogen sulphide – of which the lagoons are rich – as a source of energy to convert the inorganic carbon into organic carbon which is used by the animal.

Davide Tagliapietra is a biologist and researcher at the Institute of Marine Sciences (ISMAR) of the Italian National Research Council (CNR) in Venice since 2001. His main field of study is the ecology of coastal transitional ecosystems such as lagoons and estuaries, with particular reference to the benthic compartment. Subject of study are benthic macrofaunal population and community dynamics, bioindication, relationships between benthic ecology and hydrogeology, habitat typology and classification. Over the last decade his research has been addressing wood biorerosion in the marine environment particularly important for the damage to the Cultural Heritage sites. He is co-author of the Italian manual of methods for the study of the marine benthos and co-editor of the Atlas of the Lagoon of Venice.