The many humanitarian crises of recent years, the persistence of conditions of war and the systematic violation of human rights in many countries have forced millions of people to flee, undertaking journeys that are often very dangerous. According to data from the UN Refugee Agency (UNHCR), there are now an unprecedented 65.3 million people around the world who have been forced to leave their home in a desperate attempt to save their lives. Among them are nearly 21.3 million refugees, over half of whom are under age of 18. Many of those arriving in Italy are refugees from conflict zones or highly repressive states. Many passed through Libya, where the situation has become increasingly chaotic since 2014. The possible exposure to trauma during the journeys, the separation from their families and the social context, the loss of support systems make this population particularly fragile with special needs. In addition to the traumatic events they may have suffered before and during their journeys, some of them show signs of stress and suffering in relation to their current situation, attributable to their exile in a strange land associated with a discriminatory behavior they may experience, the existence of linguistic and cultural barriers and a general lack of opportunities. Socio-environmental stress factors, exposure to trauma and adversity accumulated over time and individual factors could lead to increased vulnerability among these people and facilitate a shift towards mental health issues. 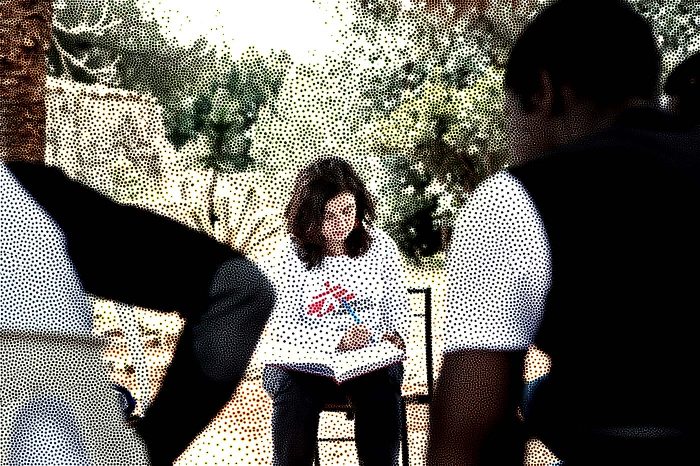 Pina, a psychologist with MSF, during a group therapy session at the Gerico CAS (Centro di seconda accoglienza – secondary reception centre). MSF provides psychological support in Sicily to help monitor migrants, refugees and asylum seekers, as often the difficulties of the journey to Europe can lead to various psychological issues. 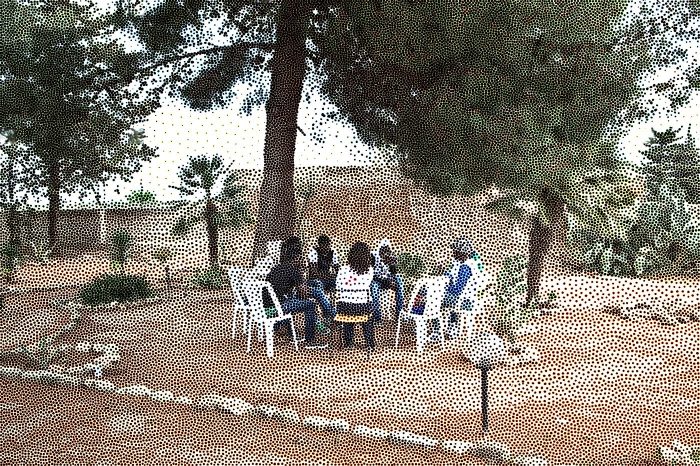 Médecins Sans Frontières /Doctors Without Borders (MSF) conducted an investigation from July 2015 to February 2016 to study the mental health needs of asylum seekers residing in extraordinary reception centres (CAS) in Italy and their access to local services. The analysis – conducted in the provinces of Milan, Rome and Trapani, which were chosen because of their large numbers of reception centres – benefited from a two-level approach using qualitative and quantitative methods. The use of focus groups and in-depth interviews with asylum seekers, healthcare workers and CAS operators made it possible to decipher the needs of the residents of the reception centres, the clinical paths taken where necessary and the response of local health services. The quantitative research was conducted based on the data collected by MSF from October 2014 to December 2015 during psychological support activities with asylum seekers resident in the CAS in the province of Ragusa. This provided a good starting point for identifying the extent of the problems and the potential factors influencing them.

MSF provided care for 199 patients, ensuring they were followed up. The average age of the patients was 23.9 years. Of the patients given care, 87% said they suffered from difficulties related to their current living conditions. The main difficulties of post-migration life were found to be the lack of daily activities, fear for the future, loneliness and concern for relatives left behind in their country of origin.

A comparison between the asylum seekers with mental health disorders and those without showed that the likelihood of having psychopathological issues was 3.7 times higher among individuals who had suffered traumatic events than those who had not suffered. 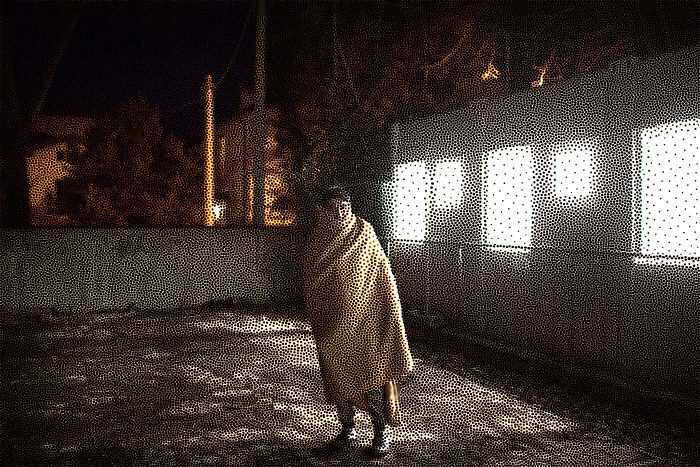 Portrait of a man, wrapped in a blanket outside a temporary dormitory in Gorizia. Since December, MSF have been providing medical care, shelter and first assistance to the hundreds of asylum seekers who were previously sleeping outdoors next to a river. Those who arrive in northern Italy are primarily asylum seekers from Pakistan and Afghanistan, arriving to Italy after a long journey across the Balkans. In the first three weeks, more than 180 asylum seekers were hosted at the MSF centre. Many have suffered traumatic events in their home countries and have had to endure an exhausting and dangerous journey. 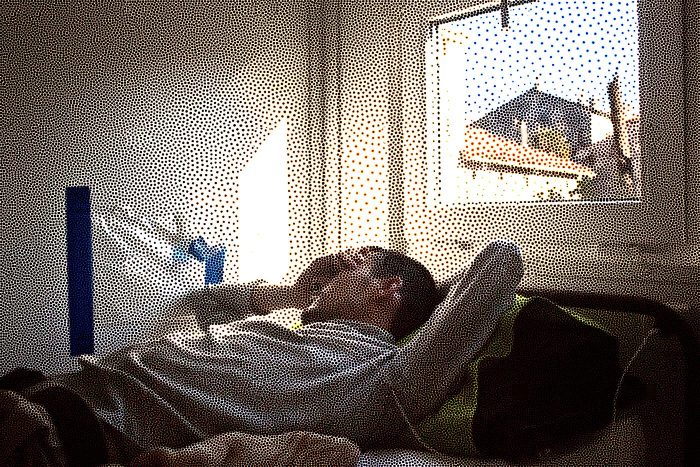 Portrait of Naquib, from Kunduz in Afghanistan.

“I thought a lot before leaving Afghanistan. I finished my school and I wanted to continue with university, but I didn’t have the opportunity. I couldn’t even go out after 7pm in Kunduz. My family is still living in Gortepe, just few kilometres from Kunduz and it is right in the centre of the conflict, I can’t talk with them regularly, just when they can travel to Kunduz. There the situation is very difficult. When I was living in Gortepe, the Taliban asked me to join them and to continue my education in a religious school. The majority of normal schools were closed. Just before I left I was too afraid to go outside, I was very scared of explosions. I left my house one year ago. I spent 6 months in Iran and 5 months in Turkey. The most difficult part of the journey was during the mountain crossing between Iran and Turkey.

We spent 15 hours walking on the snow, without food and water. It was really very cold. In Turkey I started to work to get the money for the trip. We were living in Zeytinburnu but I didn’t have documents, so I was earning 1200 Turkish liras per month but with that I started to save money to continue the trip onwards to Europe. We arrived in Greece by boat from Izmir.. We crossed the Aegean sea and we arrived at Mytilini, in Lesvos. Even though I was in Europe, I still wasn’t free to travel through the Balkans and reach Germany, you still need to deal with smugglers. I had to pay more than 8000 dollars from Kabul to Germany. When I reached Germany I was hosted in a camp in Munich. I stayed there one month, but they told me that it was hard to get documents. One friend advised me to come to Italy. At first I spent a few nights outside, I was sleeping on the streets. It was really cold. I did not have anything to eat. I’m here to ask asylum. I can’t go back to Afghanistan, I don’t feel safe there.” 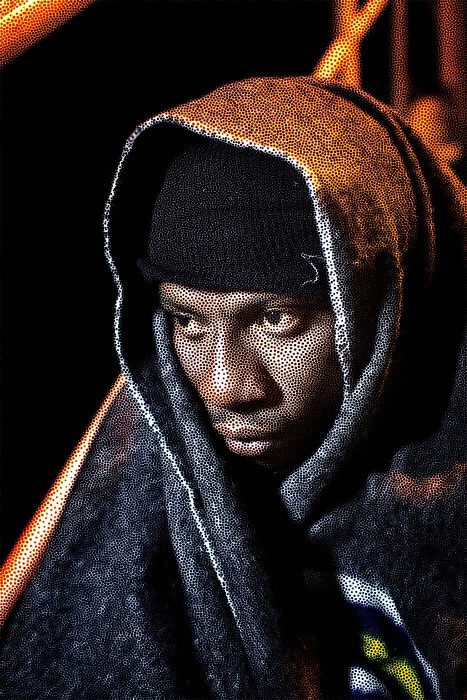 “I went to Niger to learn to be a mechanic, but after a month I still hadn’t had the opportunity to see my boss at work and there wasn’t a single car to fix. He advised me to go to Libya because there was more money there and I would be able to quickly learn to be a mechanic. So I decided to follow his advice and I saved up money and left for Libya. When I arrived in Sabha, things didn’t go as I’d hoped. Some men with Kalashnikovs took me, they wanted me to pay them but I didn’t have any money, so shortly after they decided to hand me over to the police. I spent eight months in prison, eating only bread. One day, a friend of mine from Gambia named Mohamed and I managed to escape. We still have the scars from those days. We went to Tripoli and there we worked, putting money aside in order to leave Libya.” 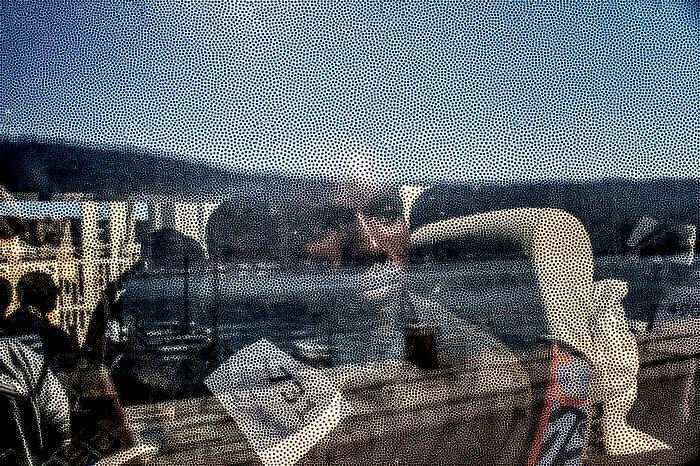 A refugee waits aboard a bus headed toward the CIE (Identification and Expulsion Centre) in the Vibo Valentia port, in Italy. 28 August 2015

The qualitative study provides a picture of a system that responds to this particularly distressed population as if dealing with an emergency, without adequate preparation. In many cases, there is no active screening available to assess the need for mental health support among the residents of the centres. The community health services often lack the expertise and resources needed to recognise signs of distress among this group. Cultural mediators, or other people who could help to establish contact and to reduce cultural distances, are rarely present. The length of stays at the centres is protracted and is often a source of further distress. It is necessary to provide an integrated response that involves the local health services, mental health departments and also the world of associations, universities and public authorities. As part of the response, dedicated multi-professional teams should be created that are able to identify specific risk factors and provide appropriate therapeutic approaches.

These findings suggest that asylum seekers who were exposed to violence have higher rates of trauma-related disorders and show the relevance of an appropriate response to such health needs. Furthermore the analysis can serve as an additional prompt for reflection to fulfil humanitarian obligations and reduce the burden of assimilation on receiving countries.

Silvia Mancini is an experienced Médecins Sans Frontières staff. She has been working in epidemiological and public health field as well as in advocacy. Her scientific expertise focuses on nutritional and mortality research, health assessment and surveillance system carried out in several developing countries in Africa as well as in Asia. She is carrying out advocacy activities on health themes (i.e. vaccination dossiers, R&D topics, mental health and migration) specific to the organisation. She holds a master in Public Health from the London School Hygiene Tropical Medicine.