If we take a walk on a beach and turn around to look in the direction we came from, we can see the footprints we left behind on the sand. While walking, we are aware that we are leaving them, and also that they will only last temporarily, soon to be covered by sand swept up by the wind or the waves. In our daily lives we constantly leave marks on the environment and its resources in a similar way, but in contrast to our footprints left on a beach they can last much longer, if not be permanent.

The concept of the ‘human footprint’ is widely used in the natural sciences as a means to evaluate the impacts of our lifestyle on the environment and ecosystem (due to pollution, to use of fossil fuels, food production, transportation, land use and so on). Most of the time we are aware that we are leaving such footprints, and therefore we try to reduce them and to minimise their impact, but when they come from unexpected sources or habits their effects are not always directly noticeable. Those are the footprints we don’t see and they are therefore the most difficult to address.

We are all aware of the fundamental role that the marine environment plays in our lives by providing food through fishery, as a means of transportation for people and goods, and as a resource for tourism and other socio-economical activities. Nevertheless all those ‘ocean services’ pose numerous problems and threats to the marine environment, which are not always direct or clearly visible. Since the early 1900s plastic has taken a central role in our daily lives: it is one of the most durable, lightweight and cheap materials produced and nowadays it is used for the mass production of a wide variety of objects. But we rarely ask ourselves what happens to all the plastic that is not recycled or disposed of through landfill. At the end of the day it ends up and accumulates in the environment and, most of the time, in the ocean.

The footprints left in the ocean can be visible as a plastic shopping bag, a soda bottle, a piece of rope or a fishing net on a beach, or they can be invisible like in the case of small fragments or particles. In recent years, micro-plastic debris have become known as one of those ‘invisible’ marks. Since the late 1990s the observation of contamination through small plastic particles (smaller than 5 mm in diameter) has become much more frequent, both in highly populated areas and in remote locations such as both poles, the deep see, the Himalayas and remote lakes. Micro-plastics are classified as primary or secondary depending on their origins and characteristics. Primary micro-plastics are small pieces of plastic (generally they are spherical, or have similar shapes) directly added to cosmetics (lotions, facial washes, toothpastes, body and facial scrubs) or to industrial production chains, where they are used as ‘microbeads’ with abrasive action. Another primary source that has recently come to light are synthetic fibres (i.e. acrylics, nylon, etc.) that can release significant amounts of small fragments of polymeric compounds during doing the laundry and other processes. Most of those primary fragments are currently not removed in water treatment plants (which are not designed to filter them) and therefore they almost all end up directly into the environment. Secondary micro-plastics have a different origin. They are fragments that derive from the breakdown and weathering of bigger pieces of debris or any other plastic litter left in the natural environment. Plastics are extremely resistant and durable materials, but, when exposed for a long time to natural conditions (sun irradiation, water, wind, salt corrosion and so on), they lose structural strength and break down into progressively smaller fragments. 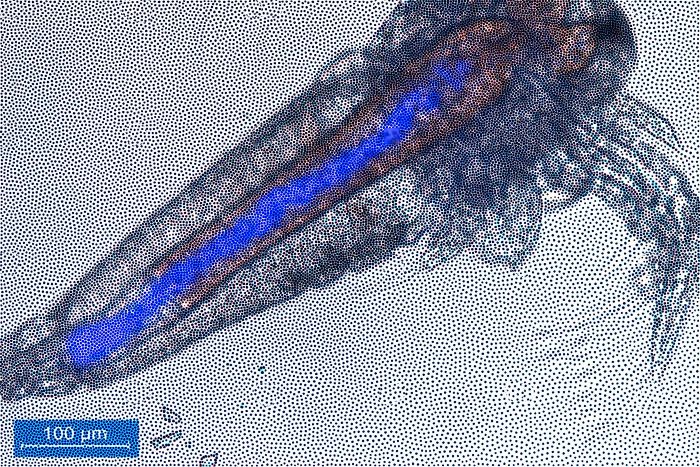 Micro-plastics have become an important pollutant due to their wide distribution and long environmental presence, their capability to carry and release other types of contaminants, and the fact that they easily transfer along the food chain, thus progressively accumulating into organisms until they reach our tables. Therefore, it is obvious how important it is to know how and where they are formed and what their fate and dynamics are when released into the environment, specifically in aquatic ecosystems, which collect all the micro-plastic loads that are carried by rivers and by drainage waters.

The Po river is the major fresh water source of the Adriatic Sea, with a drainage basin that covers most of Northern Italy. Once it reaches the Adriatic Sea, it forms a complex delta system with several main mouths that results in a wide distribution of its waters, both along the coast – clear signals of its presence can be found as far south as the Apulian coasts –, and towards the centre of the basin. Since its waters come from a densely populated area and they present high concentrations of micro-plastic particles, among other pollutants, it is important to know where those particles pass through and where they are more likely to contaminate beaches and lagoons.

A series of numerical simulations to represent the dispersion of micro-plastics originating from each Po river mouth have been performed from 1 January 2015 until 15 June 2016. Two models were used: one for currents and water column structure (i.e. the vertical distribution of temperature and salinity) and another to simulate the 3D dispersion of virtual micro-plastic particles (VMP) with a Lagrangian approach (i.e. releasing the VMP in front of each Po mouth and then letting them virtually move in the delta area depending on currents). The results of these simulation models gave the possibility to study the Po VMPs in the Adriatic and to identify the coastal areas subject to high risk of impacts. Specifically on a coastal level, the areas with higher risk are those located in the proximity of each river mouth, with a degree of risk proportional to the total water discharge of that mouth. Also the coast further South to the delta is subject to a high pressure. This is partially surprising since it is located several tens of kilometres form the river mouths, underlining that in the case of micro-plastics the impacts can be found at a significant distance from their sources.

If we consider the distribution shown in figure it is clear that micro-plastics in marine environments are an example of human footprints we don’t see, that originate from seemingly harmless actions – such as brushing out teeth, doing our laundry or leaving a bottle on a beach – but that produce significant pollution. Those actions don’t leave an immediately visible trace but they do pose a significant threat to the environment and to our health.

Francesco Falcieri completed his university studies in Marine Biology at the Università Politecnica delle Marche in 2007 and obtained a PhD in Marine Biology and Ecology in 2012. He currently holds a post-doc position at the Institute of Marine Sciences (ISMAR) of the Italian National Research Council (CNR) in physical oceanography. He focus his research interests on the physical dynamics of marine and lacustrine environments, on processes that lead to the formation of dense waters and their dynamics, riverine plume dynamics, dispersion of pollutants and particles and observation of small scale turbulent processes.