Algae can be distinguished into different groups on the basis of their colour: brown, red and green. However, in addition to the colour, they differ considerably in many other features. Marine algae are ancient organisms: in a recent discovery, a group of scientists in India found a pair of 1.6 billion-year-old fossils that appear to contain red algae, which may be the oldest plant-like life discovered on Earth. About 12,000 species of marine algae have been described to date. Marine algae are plant-like organisms that generally live attached to rock or other hard substrata in coastal areas: red and brown algae are almost exclusively marine, while green algae are also common in freshwater (rivers and lakes), and even in terrestrial (rocks, walls, houses, and tree bark in damp places) situations. But marine algae are not plants. Generally, they don’t have roots but holdfasts: basal structures that do exactly what the name suggests – hold fast to the rock. They don’t have leaves, but instead photosynthesis takes place across the whole body, and they do not require flowers, seeds and fruits for reproduction. 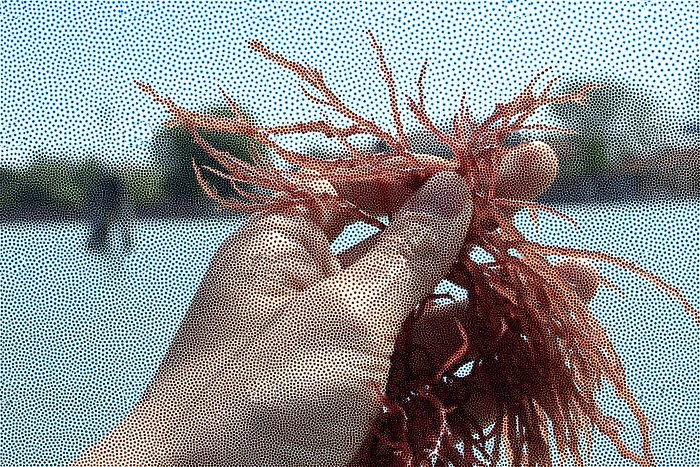 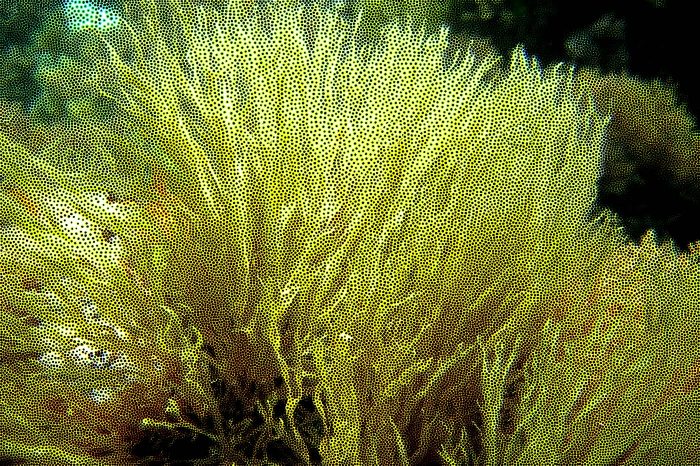 Marine algae are used in many countries as a source of food, in pharmacology, cosmetics, agriculture and waste water treatment, but also for industrial applications, such as the production of biogas and the extraction of industrial gums, called phycocolloids (phycos = alga; kòlla = glue). The phycocolloid production was very common in the seventeenth century, when some species of brown algae (Ascophyllum, Laminaria and Fucus) were collected in Europe to produce potash (potassium carbonate) and soda (sodium carbonate). The term ‘potash’ derives from the French pot (pot) and the German asche (ash), as the potash was obtained by boiling a mixture of water and vegetable ash. This practice, widespread in Britain, is illustrated in different texts and paintings, including Les Ramasseuses de varech by Paul Gauguin (1889). These kelp algae’s alginic acid can be obtained and is nowadays an important compound used as a thickening agent for ice cream, toothpastes, cosmetics, and for waterproofing fabrics. Among the phycocollids, agar-agar is a hydrophilic colloidal substance, which is colourless, that is extracted from species of red algae, such as Gelidium, Gracilaria and Pterocladia. According to Japanese tradition, agar-agar was isolated in the seventeenth century by a Japanese innkeeper, who was renowned for a dessert made from the red alga Gelidium.

Agar-agar is a thermo reversible gel: melting at 85°C and solidifying at between 32-40°C, forming an elastic substance. For these properties it is used in the food industry (as natural vegetable gelatine), in the pharmaceutical industry (as coating for capsules to transport and release drug), but also in the field of molecular biology and genetic engineering. During the past century the algae from the Venice Lagoon were also investigated for industrial exploitation. The Algarium Veneticum at the Institute of Marine Sciences (ISMAR-CNR) of Venice includes a historical algal collection, containing red, brown and green algae collected in the Venice Lagoon between 1941 and 1950, as evidence of the studies that were conducted for the production of agar-agar in Italy.

When Italy entered World War II (1940), the import of most goods from abroad decreased significantly. A number of primary commodities ran low, including agar-agar, which at the time was extracted exclusively from red algae from Japan and the Indo-Pacific area. Gustavo Brunelli, at that time Director of the Laboratorio Centrale di Idrobiologia, was responsible for discovering how to extract agar-agar from Mediterranean algae. The red algae Gracilaria and Gelidium were rapidly identified as the most promising local sources. The next step was to study their biology and distribution along the Italian coastline. For this reason, every Italian Institution working on marine sciences at that time was asked to investigate these algae. In 1941, Giacomo Zolezzi, of the Osservatorio di Pesca Marittima di Venezia (OPM), was entrusted to manage the project in the Venice Lagoon involving the Istituto di Studi Adriatici (ISA), the OPM and the Natural History Museum of Venice. Michelangelo Minio, former Director of the Museum, together with Nicolò Spada, Secretary of the ISA and Acting Director of the OPM, oversaw the samplings and studies focusing on Gracilaria confervoides, the most abundant Gracilaria species in the Venice Lagoon. 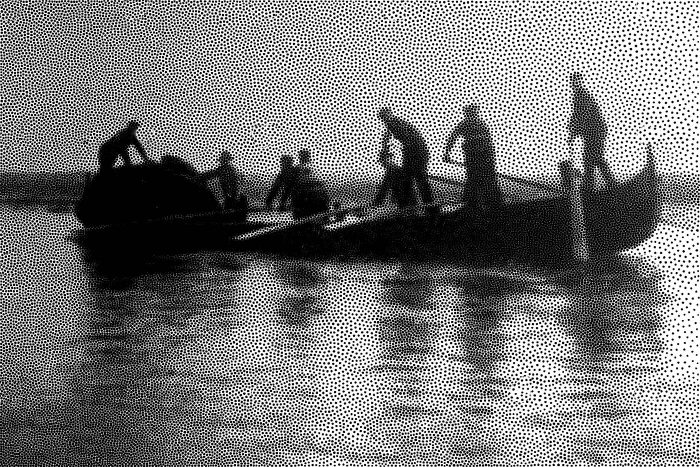 At first, the sampling was carried out by local fishermen, but their economic expectations led to an over-exploitation risking the species’ extinction several times. After this experience, algae harvesting was regulated. At the end of the war, the need to produce autarchic agar-agar ceased and the investigation on algae shifted the focus towards biological aspects. The research conducted in those years led to the creation of an algological herbarium, where algae are conserved through drying and have thus been preserved until the present. The Algarium Veneticum also includes a collection of species living outside their native distributional range and which arrived in the Venice Lagoon through natural dispersion or human activity (i.e. vessel traffic or aquaculture activity). These ‘alien species’ can have various effects on the ecosystem by changing the local biodiversity. 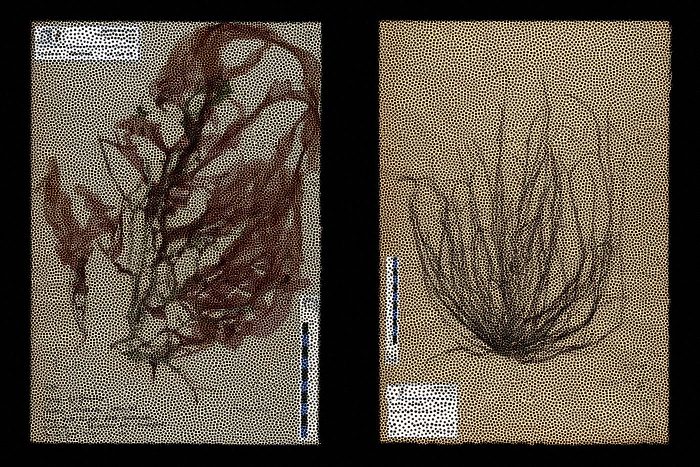 A herbarium can be regarded as a data bank, where plant collections represent physical evidence of the occurrence of a species at a particular time and place, providing us with information of botanical interest from past centuries and, in some cases, with information about the history of plant names and uses. The algal collections of the Algarium Veneticum, not only allow the presentation of the beauty and diversity of marine vegetation, but they also represent a valuable tool for marine botany studies, providing the comparative material that is essential for studies in taxonomy, ecology, morphology, biodiversity and vegetational changes that may be due to human impacts on the lagoon. At the same time, the collections have educational as well as historical value.

The Institute of Marine Sciences (ISMAR-CNR) of Venice developed an open access repository, the Archivio di Studi Adriatici (www.archiviostudiadriatici.it), to host the natural collections, papers, documents, maps and historical books of the Institute. The herbarium and book collections are still a true gold mine of information, allowing us to trace the history of science, but not only that – it is worth preserving them for future generations.

Simona Armeli Minicante holds a Master degree in Marine Biological Resources from the University of Palermo and a PhD in Environmental Sciences from the University Ca’ Foscari of Venice. Her research focuses on the study of biodiversity of marine algae (seaweeds) through microscopic observations and molecular techniques of DNA barcoding. She holds a post-doc position at the Institute of Marine Sciences (ISMAR) of the Italian National Research Council (CNR) in Venice, where she curates the Algarium Veneticum, a scientific herbarium containing more than a thousand of dry pressed algae from the Venice lagoon, representative of the high biodiversity of its ecosystem.

Alessandro Ceregato graduated in Natural Sciences, obtained a PhD in Palaeontology, and a Master in Historical Scientific Museology, focusing his investigation on recent and fossil marine environments, working with historical scientific heritage and museum collections. Ceregato joined the Institute of Marine Sciences (ISMAR) of the Italian National Research Council (CNR) in 2002, embarking on several oceanographic cruises and collaborating in national and international scientific projects. In 2010 he started working on the algae collection Algarium Veneticum. He is currently supervising the development of an open-access digital repository for the Archivio di Studi Adriatici, and a GIS platform for sharing historical maps, in collaboration with CNR IRCrES, and the IUAV University.