†
the
world
was ending
as it had been
doing for millennia

All these men and women in their lab coats, and their immaculate pens – biros – pushed into the front pockets of their lab coats (…) clip clop, clip clop (…) like time running sideways in a horse universe (…) horse (…) smack (…) ketamine (…) horse tranquiliser (…) like time standingstill (…) clip clop, clip clop (…) was that the sound of the lids being replaced on biros heard by microbes? A horse-sounding rattle of heels on stone floors that echoes in their microbial earcanals (…) do microbes have ears?

It was a back room at the Natural History museum in London, not some awkward, foreshortened, Victorian corridor, but an expanse of wood-panelling like a gentleman’s club in an Arthur Conan Doyle novel (…) leviathan. My height at the time put me at the same level as the giant squid’s eye. Opaque and mirrored – it had an opalescent quality, as if threatening a loss of self as one plunged into its near abyss, language unscrambling as one fell. A black and impenetrable thing, and in that moment it seemed to take me in. leviathan (…) than, thanthan. At this point the room did shrink forming an elevated platform on which we both stood: 2 beings locked in an eternal embrace. than, thanthan, tan. And yet my longing, was met with a whiff of disgust, putrefaction entering my nostrils, like some carefully carved words (…) staccato conversation whittled like a bird out of some gnarled piece of decaying wood. mulch. Like some dark elder God, indifferent and withdrawn from my destiny, as if it had long ago scornfully ceased to play a part in human affairs. And yet for that brief moment before my father interrupted, we shared something leviathan < thn than tun like an unholy communion.

My father was a marine biologist, working as a researcher attached to the examination of the giant cephalopod, leviathan, then thin thong through some inter-institutional partnership, probably funded by some inappropriate subsidy from a pharmaceutical or agribusiness (agoraphobia, aggressive conglomeration) conglomerate. That said, I loved coming in here permitted, if only briefly, to gaze on such wondrous and dire possibility, ty tee too. Of this magnificent descendant of the Orthocone, prime predator of the Devonian seas (i see you). And yet if these were Gods (odds, oddats), what then were we? A malevolent species of monkey that had evolved hairlessness and sectarian conflict. I would like to say that we had done so on an epic scale, but that would just be monkey hubris, and considering the Orthocone ruled the sea, when there was nothing on land, except sea (icu) scorpions coming up to lay their eggs before feasting on their own young – a grand total of 650 million years ago – we have a lot to learn from the true master race. Or perhaps we are learning and the current phase of piracy is just a leaning, a pull from god knows whence (…) leviathan

Perhaps Lovecraft knew something of this in his dark ramblings about rumblings in cavernous recesses within the Earth itself, and in crannies of the mind that folded space in unseen, perverse ways that would only later simplify and flatten out into something that our perceptual field (yes a monkey perceptual field), could comprehend. Like bats in the night sky, screaming out their rage in perpetual diving and buzzing cacophonous civil war: the true symphony of the night of which we are barely even aware, or perhaps more accurately remain blissfully ignorant of in our delusion of being at the centre of all things. The centre of all things, all things are central to me/us. In our grand delusional malevolence. hence, fence dense>

Whether, or for that matter how, that might be said to be related to the spots that began multiplying and oscillating on the sun’s surface was anybody’s guess. But appear they did even to the naked eye. Initially it was speculated that they were the lagged appearance of solar storms. Or even the millions of years’ delayed vestigial traces of gravitational waves. Appearing to our retina light years after their original manifestation. And so we were being obliterated through a complex time delay mechanism. Or perhaps a mechanism that squeezed matter and amplified the pressure on our sun, in a way that straddled our limited concepts of both space and time. Like something out of the Vedas, those ancient scientific manuals not speaking of mysticism in terms of all times and places co-existing (and co-habiting), but of factual consonance. As time began to accelerate and therefore coincide increasingly. 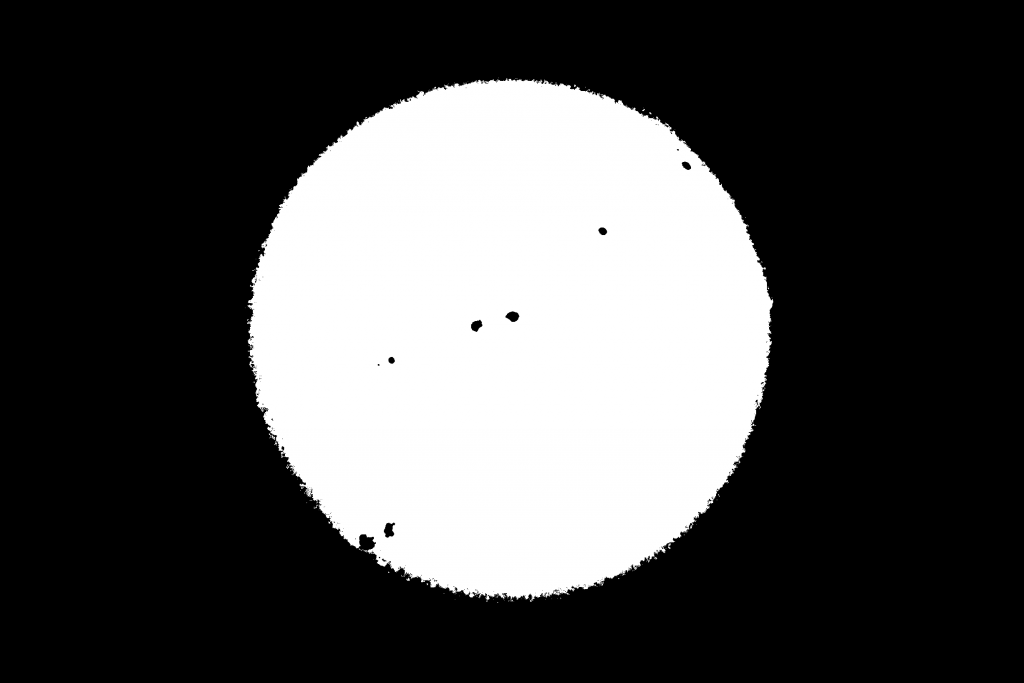 I preferred to think of them as scabs; scabs forming on our collective consciousness that reflected the taint of guilt that was indissoluble from our being. Less existential dread, than the more scientific fact of our over-presence on this globe since emerging in pole position from our poor Parthian cousins: the Neanderthals. Although we carried with us 1–4% of their DNA: a kind of embodied guilt at our own transcendence. Or should that be survival? Survival always seems so impoverished a notion, like a penitent existence. And yet here we were. Clinging like barnacles to the body of a dead whale. loch ness monster, loch ness monster.

A rash of suicides accompanied each new and increasing manifestation of sunspot activity. As if we were a mirror for something much bigger and more pressing than ourselves. A dark occlusion (contusion < confusion) of the sun was perhaps god’s way of averting her – purr – gaze, or perhaps a blackening (quickening, slackening quackening) of the very source of light and heat, to transform it into the opaque and impenetrable gaze of the opaline and hermaphroditic forebear of that tentacled – leviathan – being that first issued from primordial chaos and formlessness. Although maybe rapture (snapchat, capture, scream) is a better collective noun when speaking of mass, wanton acts of self-destruction, particularly from an ecological or religious point of view. The world was ending as it had been doing for millennia. Only this time a level of fatigue seemed to permeate even the survivors, as if it was too much effort to continue to get up each day and eat and fuck quack, quack, quack, leviathan, and then sleep it off before more of the same the next day and the next. It was funny how after years of regulation the thing we feared most was not violation or violence, but boredom. Sex, like most things becomes boring if there are no longer any restraints placed on it. All those little monkeys jerking off to internet pornography: monkey on monkey, multiple monkey penetration, with and without plastic penetrative aids, monkey on goat etc. It’s funny to have been something of an anarchist all along and to suddenly see the relevance of ‘society’. And now as the short-term experiment we liked to call: ‘society’ was ending, each prophecy of the end of the world was finally coming to pass: the flood, fire, earthquake and saving the most Shakespearean (on a spectrum of melodrama) for last: The Tempest. The weather seeming to parallel the mood of Earth’s remaining inhabitants. Sorry: monkeys. The animals didn’t mind so much. they still like to fuck. Quack quack quack, clop clip clop, Aaaaaiiieeeeeeeaaargggghhhhh.

Cut to image of a pack of dogs feeding off a corpse
by the side of a river in India.

The older gods had decided on a cull.

Aaaarrrggghh! There was a stain on my trousers, spreading like some kind of hematoma. I had found some cold coffee and tried to heat it up over a makeshift camp-fire – loch ness monster, lochness monster. Like the limited pressing I’d picked up from Honest Jon’s in my teens.

I burnt my finger on the kettle, although calling a tin can carved into a receptacle by a rusty pen knife a kettle, might be overstating the facts. aaarrrrggghhh, monster from the deep. the loch ness monster gonna creep (…) and boo! It got knocked over, and there I was jumping around and yelling to no-one in particular, with burning coffee down what was left of my jeans (…)

I found an open door. It had been forced, like so many of us. Did we even get a look in as to whether to top ourselves or not? Or was it programmed in advance? The jagged edges of glass, seemed to suggest a symphony in discordance. Crack, crrrrzzzzcrussssshhhh, zzzzinngg (…)

I let myself in and up to an ex-council property on the 3rd floor. The owner had left it vacant and possibly done himself in elsewhere – very thoughtful.

There – king of the monsters, loch nesss monstaahhhh – was still some cold water in the tank, and whaddya know, the water heater was still working. Like some crazy machinery that hadn’t been informed it was still toiling needlessly. This was cause for celebration, I was gonna wash me hair!