A vast energy source for the Earth, the sun has a surface that is not uniform but marked by various sunspots where eruptions of powerful magnetic force congregate. These surface manifestations of disturbances in the sun’s internal magnetic force reveal the existence of clear boundaries and walls between sections with different physical characteristics. Scientists use changes in the number of sunspots to detect variability in solar activity, which are then used to analyze various anomalies in the Earth’s1We use the term “sunspots” to refer to areas on the solar surface with relatively low temperatures and strong magnetic fields. In this case, different sunspots and regions signify different physical characteristics such as temperatures and magnetic fields. environment. In other words, the existence of sunspots signifies activity within the sun and extreme fluctuations in the terrestrial environment that receives energy from it.

Solar radiation energy is not transmitted evenly across the Earth’s2This refers to the sum total of electromagnetic radiation emitted by the sun. surface. Some of it is reflected back or absorbed in the atmosphere, and some is emitted back into space as terrestrial radiation energy after being used for heterogeneous heating on the land or sea surface. In opposition to this heterogeneous heating is a phenomenon of heterogeneous cooling, which creates vast movements in the atmosphere and seas and is a chief cause of dynamism in the Earth’s3This refers to the absorbed solar radiation energy that is emitted back into space by the Earth. environment. Innumerable “boundaries” and “walls” exist, like sunspots, on the Earth’s surface including many things that exist despite being invisible to the eye – coastlines, fault lines, and front lines, among them. We often experience abrupt changes to our environment as we pass through meteorological fronts. Clear examples of these include tropical cyclones such as typhoons and hurricanes that form over the sea.

The Earth has long sustained a balance between the energy that it absorbs from the sun and the energy that it emits. Just as winter follows summer, a stable state of balance has long been maintained despite natural variability at different scales. Yet, as the human population has dramatically increased, the ways in which we use the planet have given rise to weather irregularities, often resulting in changes to the extremes – the phenomenon we typically refer to as “climate change.” The unprecedented extremes in heat, rainfall, snowfall, water level, and wind  that we experience these days, and the growing number of disasters caused by severe weather – droughts, flooding, wildfires, and landslides, to name a few – bear some connection to these changes in the Earth’s environment.

Most of the increased heat from the recent climate change attributed to global warming has been absorbed into the oceans, which serve as the Earth’s largest “storehouse” for heat. This, in turn, has led to problems for the global environment including warming ocean, rising sea levels and ocean acidifying sea water. Not only do these climate change issues cause severe weather and exacerbate natural and other disasters, resource depletion, environmental pollution, and ecosystem destruction but they also have a severe impact on human survival. Some have predicted a rise in the number of refugees as climate changes continues going ahead. Whales, which exist alongside humans as apex predators in the marine ecosystem, offer a reflection of our struggles with the unprecedented climate regime shift in the Earth’s environment that we are experiencing today amid changes in solar energy – which somehow originates in those sunspots.4Environmental changes such as ocean acidification typically have a severe impact on marine organisms with calcareous structures, and there has been an increasing number of cases of small organisms consuming small pieces of undissolved plastic that they have mistaken for food, causing suffering and even death. When a change occurs in one species, it also affects all of the other species that consume it and the species that consume those other species. As apex predators in the marine ecosystem, whales are forced to contend with the final effects of all these accumulated changes.

Is there no solution? Perhaps there is no one who can provide a clear answer to that question. But the unending human desire to explore and take on the deep sea – that most unexplored of fields, even more inaccessible than outer space – offers a message of cautious optimism and hope for the future of human beings and whales thanks to recent advancements in ocean observation and exploration technology. Covering more area than the six continents in their five oceans (the Pacific, Indian, Atlantic, Southern, and Arctic) and reaching average depths several times further down than the average altitude of the continents above sea level, the vast seas remain as yet unexplored as do the countless life forms that inhabit them. Home to phytoplankton that produce over half the world’s oxygen and absorb over half its carbon dioxide, the oceans serve as the Earth’s biggest climate controller while they provide self-purification functions for a healthy marine ecosystem and almost limitless stores of seafood and underground resources. They remain an uncharted territory even today, a time of driverless cars and commercialized artificial intelligence. It may not be going too far so say that the key to resolving our problems lies hidden in the sea – the sea not as a landscape but as a target of exploration.

Exploring it, however, will require efforts to overcome not only the tangible natural boundaries and walls present on the Earth’s surface – the coastlines, fault lines, and front lines – but also all of the intangible barriers we have erected. Overcoming threats to the global environment and enabling humans to continue surviving and thriving on the Earth will require us to overcome not only artificial boundaries that we have created such as national borders and territories, territorial waters and airspace, and Exclusive Economic Zones (EEZs) but also boundaries of ethnicity, gender, and academic disciplines. We will need more active attempts boldly to cross disciplinary boundaries and walls of specialization.

The phrase “East Sea” (i. e., the Sea of Japan) is a significant one to South Koreans, appearing in the very first line of the South Korean national anthem. The East Sea was also the setting for a story of raft exploration during the Balhae era (698-926 AD) and for millennia of adventures and explorations dating back much earlier. The East Korean Warm Current flows northward along Korea’s East Coast, carrying relatively warm water of a southern origin to the north as cold water is transported southward along the coast and in the lower layer. Between them, a boundary known as a front is formed. The sudden changes to the marine environment that occur over this “wall” are a source that sustains a healthy ecosystem and abundant biotic resources. An analysis of data collected through several research cruises across this front shows clear changes in the water temperatures and ocean currents (Fig. 1). Just as we can witness rapid temperature changes happening at the boundary of a front between warm and cold air masses in the atmosphere, so clear fronts exist between different water masses in the oceans, with rapid changes in water temperatures and ocean currents occurring across those “walls.” It makes complete sense, then, that we would need observations on both sides of the boundaries – the warm side and the cold side – in order to understand and predict the dynamics governing the positions, strength, and structures of the fronts as they change from moment to moment.

This is not limited to fronts. Different water masses are distributed as they are transported from one place to another through various (known and unknown) processes in the vast seas. Because they determine the health of the marine environment and ecosystem, they demand international cooperation and global oceanic observation partnerships that transcend all walls and boundaries – divisions of different countries’ EEZs, national borders, ethnicity, languages, and areas of expertise (Fig. 2).

Once we are able more quickly to detect and predict irregularities in the Earth’s environment originating in sunspots and better understand and use the marine ecosystem symbolized by whales – as well as our own Earth environment – we will be able to look into the seas to provide the key solving the global environmental issues we are facing. What we must not do is not to rush to exploit them simply because we find no immediate visible solutions from our exploration. An geoengineering approach becomes possible once we have adequately diagnosed and understood the conditions and changes of the Earth’s environment and come up with the sufficient prescription. Marine scientists will continue in the future5Marine scientists explore the oceans to study what phenomena have occurred there in the past, are taking place now, and/or will occur in the future. They analyze past observation data to discover the hidden principles behind changes in the marine environment and conduct modeling research to predict what future changes will arise. Such activities are quite different from an engineering approach aimed at developing technology to explore marine and underground resources or extract clean energy from the seas or at developing special equipments to improve the water quality or the environment. The oceans remain underexplored, and scientists will need to make many discoveries before the developments of engineers. Only when humankind has gained more knowledge of the seas and employs it properly will we see the development of technologies capable of addressing these issues., venturing one step at a time into the rough seas to conduct observations and strip away the hidden veils of mystery in the oceans and the Earth’s environment (Fig. 3) – imagining those spots inside our sun and the whales that might appear along the horizon at sunset… 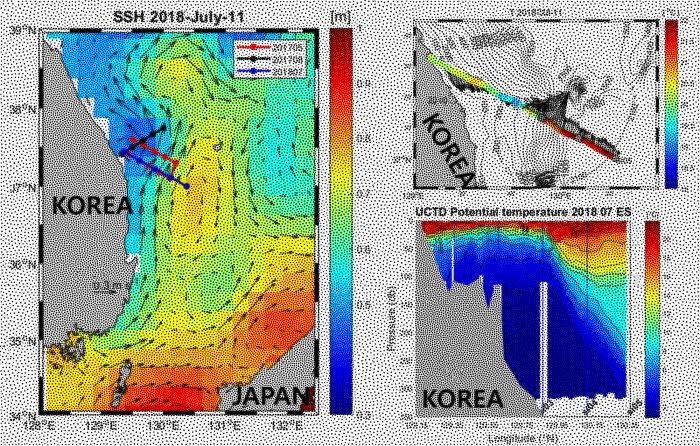 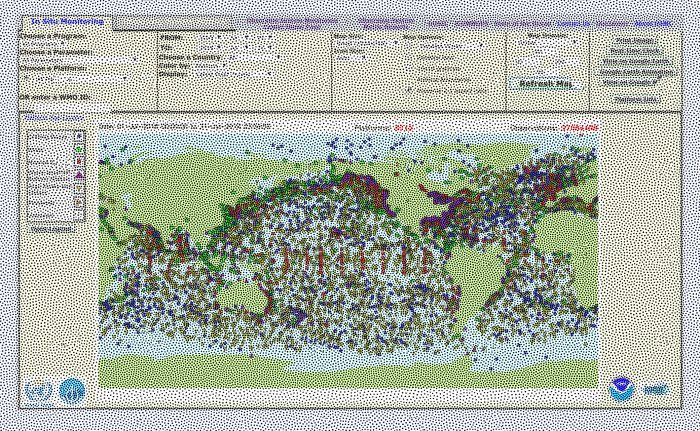 Fig. 2, Locations where more than 37 million ocean observational data were collected from 8,713 platforms in July 2018. This figure was generated from the webpage of the US National Oceanic and Atmospheric Administration (NOAA) Ocean Observing System Monitoring Center (http://osmc.noaa.gov). 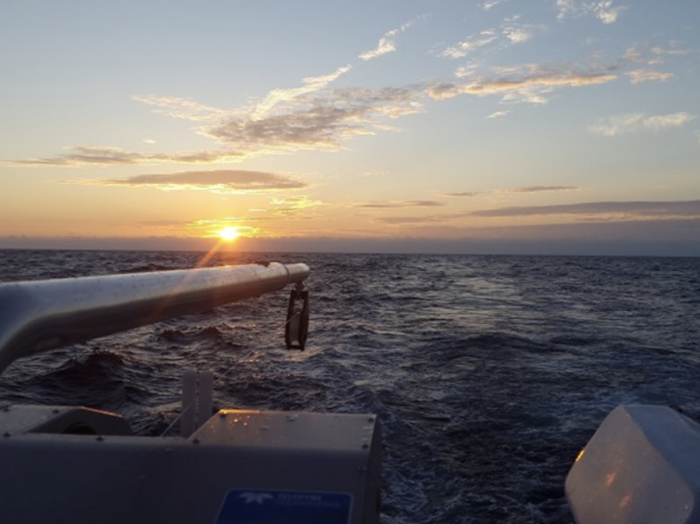 Fig. 3, A photo taken during one of the research cruises near and off Korea’s East Coast, showing the observational instrument against the background of a sunset.

Nam SungHyun (born in 1976) is an associate professor in the Seoul National University School of Earth and Environment Sciences. He is a member of the steering committee for the SNU College of Natural Sciences’ Research Institute of Oceanography and the deputy director of the advanced course in maritime policy. After earning a doctoral degree with research in the field of physical oceanography from the SNU College of Natural Sciences, he dedicated himself to defense technology research and development at the Agency for Defense Development, earning a silver medal at the 2008 Defense Science Awards. Between 2008 and 2014, he worked in the United States in the fields of physical oceanography and observational oceanography, having been selected for a postdoctoral research fellowship at the Scripps Institution of Oceanography at the University of California San Diego, a prestigious institution boasting the longest history worldwide in the fields of earth and environment sciences, oceanography in particular. He has served since 2017 as a representative for the South Korean government on the North Pacific Marine Science Organization (PICES) subcommittee on marine physics and climate. Since 2018, he has been active as a trustee of the Korean Society of Oceanography, an editorial board member of the Korean Society of Coastal Disaster Prevention, a delegate of the Korea Geophysical Union, and a member of the 2012 Busan Joint Assembly organizing committee for the IAMAS-IAPSO-IACS. Over the past 20 years, he has taken part in over 50 research ship observation trips in the Korean Peninsula’s littoral waters, on the California coast, and in the Pacific, Atlantic, and other major oceans. He has published some 40 papers in major domestic and foreign academic journals in related fields along with five books for the general public.